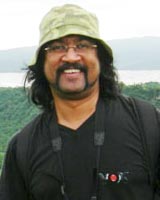 Dato Dr. Dionysius Sharma, or Dr Dino as he is more popularly known, first worked on the fauna of the Lower Kinabatangan in 1991. His first assignment, under WWF-Malaysia was to assist in the study of the unique Proboscis monkeys and to document the diverse array of mammals, birds and reptiles occurring in the floodplains. Having traveled throughout Malaysia on conservation fieldwork assignments, Dino still regards the Lower Kinabatangan as his favourite wildlife watching location.

Born in Malacca and is of north Indian/Portuguese descent, Dino spent a lot of his childhood outdoors, observing wild animals and appreciates the need to conserve them. Graduating from Universiti Malaya with a degree in Ecology, he went on to earn his PhD in Conservation Biology from the Durrell Institute of Conservation and Ecology, University of Kent in England.

Based at Sukau in 1991, Dino studied the wildlife at the Menanggul, Tenegang, Resang and Sapasidom Rivers and the various oxbow lakes, documenting the vertebrate fauna and trying to estimate their densities. Even back then, he observed the agriculture expansion in the floodplains had reduced the survival of the various animals. In his report titled “A Wildlife Survey of the Proposed Kinabatangan Park”, he provided the first checklists of mammals, birds and reptiles occurring at the Lower Kinabatangan, and noted that ecotourism was going to be important in the area, reaffirming the ideas of previous workers there. Since 1991, Dino has been back to Sukau on various assignments including facilitating foreign media visits, facilitating training of local journalists in environmental reporting, and acting in an Animal Planet reality-style program called Planet Action that featured orangutan conservation.

In 2007, Dino was appointed the Executive Director/CEO of WWF-Malaysia and continues his interest in Sukau's and the Lower Kinabatangan unique biodiversity. Through the work of WWF-Malaysia has established a Corridor of Life at the Kinabatangan Wildlife Sanctuary. His preferred choice of stay is the Sukau Rainforest Lodge; because of the manner the management of this lodge promotes ecotourism and the professionalism of staff in managing the needs of tourists.

In appreciation of Dr. Dino's substantial contribution in Kinabatangan, Sukau Rainforest Lodge dedicates room No. 2 in his honour.