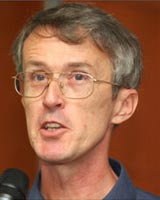 Born in the United Kingdom, Dr. Geoffrey Davison and studied at the University of Reading (UK) studying zoology and then University of Malaya, Kuala Lumpur, at the Ph.D. level.

Starting his conservation career in 1976 during surveys of Danum Valley and from 1990 he worked for WWI-Malaysia (1990-2004) in Kuala Lumpur and Kota Kinabalu, and before that was teaching in Universiti Kebangsaan Malaysia (1980-1990). He is also an Honorary Member of the Malaysian Nature Society and has also represented the UNEP World Commission on Protected Areas and various IUCN Species Survival Commission specialist groups.

In Kinabatangan, Dr. Davison's special mission was to oversee WWF projects in the area from 1998 to 2004, including Partners for Wetlands, AREAS (Asian Rhino and Elephant Action Strategy) and development of homestay program at Batu Puteh.

Dr. Davison's remark on Sukau: “Sukau must be one of the premier wildlife viewing spots in South-East Asia. It never fails to yield interesting sightings, whether of monkeys, elephants, orangutans, hornbills or other exciting species that are increasingly difficult to see elsewhere. This is a place where long term survival of wildlife will depend on members of the agricultural sector to collaborate with each other, rather than trying to solve wildlife or flooding issues independently”.

Dr. Davison is a loyal fan of Sukau Rainforest Lodge (SRL).He has visited Sukau more than 20 times since 1995 and most of his stays were based in SRL. “SRL provides a peaceful, scenic venue and base from, which to work, and to enjoy the river and its wildlife”, said Dr. Davidson.

At present (as of 2011), Dr. Davison is working on terrestrial conservation issues in the National Biodiversity Centre, National Parks Board, Singapore. With deep love for the environment, Dr. Davison looks forward to continuing his service in conservation.

Sukau Rainforest Lodge reveres Dr. Davison as a true conservationist by dedicating room no. 7 to him.