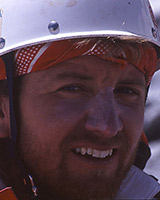 Few people would remember the 10th October 1987 more than Michael Groom. At 6.15 pm, Michael became the first Australian to climb the world's third highest mountain, Kangchenjunga, without the use of bottled oxygen or Sherpa support. Finally, in 1993, he was able to achieve his childhood ambition of climbing Mt Everest.

In 1995, Michael became the fourth person in the world to climb and reach the summits of four of the highest mountains in the world. He achieved all this without the assistance of supplemental oxygen.

Today, though Michael Groom is more often on the ground sharing his amazing story and inspiring many as a professional speaker, he remains as and without question, one of the world’s greatest mountain climbers of our time.

He shares his first-hand experience and abundant knowledge with others including assisting soldiers going off to war, supporting athletes struggling from serious injury, as well as advising professionals to get closer to the truth of “no pain, no gain”. His remarkable story of human endurance has inspired many to persist and overcome life’s toughest challenges.

What makes Michael’s story incredibly compelling is how he overcame his own challenges and endured some extremely life-threatening situations, from ascending and descending truly dangerous climbs, to being thrown off by an avalanche, to losing the front third of both his feet. If you were to ask Michael what his greatest achievement is, he would tell you, “My greatest personal achievement would be one of two; learning how to walk again after losing the front third of both feet. It’s something that I still have to deal with today and, overcoming my fear of public speaking,”.

He was awarded the Medal of the Order of Australia in 2000 during the Australia Day Honours for his service to mountaineering.

As recognition for his incredible and inspiring life’s story as a mountaineer and human being, we are dedicating a room to Michael Groom at Sukau Rainforest Lodge.