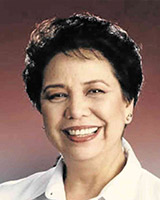 Chairman and President of the International School of Sustainable Tourism in the Phippines, Dr. Mina T. Gabor is not a stranger in the global tourism arena. National Geographic cites that it is “the first and only sustainable tourism school in Asia and the Pacific Region” which is a huge contribution in the tourism industry. She previously served for 18 years in Philippine government, including serving under Four Philippine Presidents, President Ferdinand Marcos, President Cory Aquino , President Fidel Ramos and President Joseph Estrada (for 6 months) either as Secretary of Tourism and Undersecretary of Trade. She is also remembered for establishing the Center for International Trade Expositions and Mission (CITEM), the export promotion arm of the Department of Trade and she strongly pursued domestic tourism while in the Department of Tourism with the now famous slogan “Huwag maging Dayuhan sa Sariling Bayan” (Don’t be a stranger in Your Own Country), and started several tourism products like the pilgrimage tours, farm tourism, and others. In recent years she has worked primarily in the business sector and as Honorary Consul to the Republic of Maldives. She is regarded as one of the important international experts and resource person for trade and tourism.

Some of her international recognition includes being one of the Top 35 Most Powerful Women in Travel, a recognition by the New York based “Travel Agent” Newsweekly Magazine; Best instructional TV Program for “Export…Made in the Philippines” by the Catholic Mass Media Awards Body; a 1987 Agora Awardee for Outstanding Achievement in marketing; 1988 International Award for Outstanding Performance in Export Promotion, the first in Asia by the Japan External Trade Organization (JETRO); among several others. She is the second woman, after President Corazon Aquino, to be honoured by the Philippine Military Academy for her exemplary performance in government.

In June 2017, a distinction award in Sustainable Tourism category for her contribution to the advancement of Philippine Tourism given by the Rotary Club of Manila, the oldest Rotary Club in Asia. In January 2017, she was given the Tourism Award by SKAL International. Her advocacy for community-based rural tourism especially farm tourism has paid off with the enactment of RA 10816; an Act to Develop Farm Tourism. Her long list of achievements and awards both in Tourism and Trade made her a sought-after speaker in these areas of expertise.