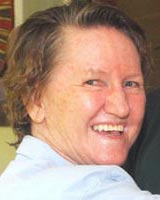 The compelling story about Sylvia Jeanes’ contribution to human development and nostalgia for the Kinabatangan River is truly an inspiration. Sylvia was born in Brisbane, Australia on 2nd May, 1941. Coming from a poor and uneducated family, she got a job as a telephonist before joining the Church Missionary Society. After night-school, Teachers' College, and experience in a semi-rural primary school, she proceeded to Sydney where she obtained a Licentiate in Theology. Later studies in Singapore gave her the opportunity to write her research paper for her Master of Ministry outlined the History of the Sabah Anglican Interior Mission. In 1992, she returned to Sydney where she obtained a MA in Theology and then lectured in the Sabah Theological Seminary in Kota Kinabalu.

The Anglican Church in Sabah had nine English-medium primary schools, one of which was in the remote area of the upper Kinabatangan, at Tongud, four days from Sandakan, and two days boat-ride above Sukau. Sylvia's first journey to the upper Kinabatangan in September, 1967 was an unforgettable one. Departing Sandakan on the Resident's launch alone, her first night in Sukau sleeping on the launch, was to venture into a land of the fearfully unknown.

Her arrival in Tongud was welcomed by the teachers and students of the Tongud Mission Primary School. At that time, only one student had proceeded to the nearest Secondary School in Sandakan, which was known all over the State for the pupils' fluency in English. One student later staffed the Rural Health Clinic in Sukau. Others were employed by the Game Branch in the Veterinary Dept and have contributed to the work on the Turtle Islands, and as Game Rangers. Others have made their contribution in the public and private sectors. Some pupils have returned to their former school as teachers, and clerks. Others have gone on to help staff the hospital in Tongud, and others into the church. Her contribution to education was recognized by the Government with the granting of permanent residence in 1980, and was awarded a BSK (Bintang Setia Kinabalu) in 1986.

From 1967 – 1979, Sylvia did many long trips up and down the Kinabatangan in times of drought, in rapids, in floods, breakdowns, sleeping at pengkalons, shops, timber-camps, villagers' houses, bitten by bed-bugs and scorpions. Once swamped by a launch and left swimming where later a crocodile was sighted. Each trip has its own story to tell. The trips came to an end in 1979 when a logging road reached Tongud.

Her last boat-trip to Kinabatangan was to visit the Sukau Rainforest Lodge with her sister in November, 2003. What nostalgia as she crossed the Labuk Bay, stopped at Mumiang, journeyed through Abai, then Sukau. So much had changed, but the river and the animals have remained. Sylvia resides in in Kota Kinabalu. She still assists the poor and under-privileged with running literacy classes under her house. She plans on staying here as long as she can and hopes for many more visits to the Kinabatangan and Rainforest Lodge, which hold a lifetime of memories. The story of Sylvia Jeanes was also published in a book entitled ‘Riding the Rapids’, written by Ashleigh Hooker and Jack Johnston.

In recognition of her enormous contribution to the Orang Sungai in Kinabatangan, Sukau Rainforest Lodge is proud to name Room No. 14 after Sylvia Jeanes.