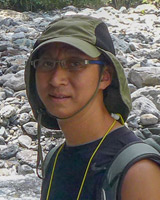 Born in Tokyo, Japan in 1965, Yukio Hasegawa is a Japanese Architect who did an amazing job in designing Sukau Rainforest Lodge’s renovation of phase-1 as well as our Gecko Lounge. He has also worked on the design of Phase-2 of the lodge’s new villas.

When he was only 15 years old, Yukio served in the Japanese military force (Ground Self-Defence Force) for six years. Being in the wild was part of his job when he served in the Japanese military and it was then that his interests for the outdoors came to life. After completing his service in the military force, he went to the United States to study Architecture at Oklahoma State University.

From roughing it out in the wilderness during his military service, Yukio found himself pursuing a different path in the concrete jungles of few of the world’s most iconic cities. He went on to work in several large architecture firms upon graduation, such as Helmuth Obata and Kassebaum (HOK) in San Francisco and after, Kohn Pedersen Fox Accociates (KPF) in New York. He later went back to his home country Japan and worked at Kajima Design, Tokyo.

“It was exciting to be part of a team of architects who focus on designing iconic high-rise buildings and airports. But I felt something important missing when I’m designing these buildings,” Yukio mentioned.

A significant change took over his career as an architect when he made a huge decision to move to Malaysia, the home country of his wife Darline who is a scientist and forest officer in Sabah. Yukio, Darline and their son Kensei are passionate about nature, which was one of their reasons for the move to a country with lush biodiversity.

Yukio’s move to Malaysia also ignited his interest in sustainable design. He opened his own practice in 2004 and expresses his love for nature and the rainforest through his sustainable architecture designs. Today, Yukio is enjoying two of his life’s passions; nature and architecture, which he incorporates with his deep rooted Japanese culture.

“In Japan, the concept we call “Ma”, is when time and space is combined together. Generally, people believe that time is always flowing universally. But in Japanese culture, I believe that time flows depending on the individual and place. If one is sensitive, he (she) can feel the flow of time differently. And you can see or feel something different when you become still and try to be sensitive towards your surroundings. In Japan we call is “Utsuroi”. I felt strongly that Sukau has its own time flow and I wanted to express that in the design. Hopefully, guests can feel it too when they stay at Sukau Rainforest Lodge.”