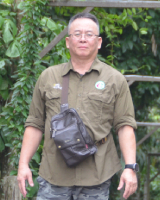 Naturally gifted with determination with an immeasurable amount of hope and hard work, Baton was instrumental in setting-up the businesses alongside founder Albert Teo over a period of 30 years.

Baton came from humble beginnings. The Penampang-born Sabahan, spent most of his teenage years in Sabah, receiving his primary school education at St Joseph Primary School and St Michael, Penampang and later continuing his secondary education at Maktab Nasional, Likas. He then furthered his education in Management and graduated from the Malaysian Institute of Management (MIM). He found himself drawn to the tourism and hospitality industry in Sabah.

He started his career working as a Sales Executive with Hotel Shangri-La, Kota Kinabalu from 1980 to 1986. He went on to work as the Operations Manager at Api Tours & Travel Sdn Bhd from 1986. Realising the beauty and potential of Sabah tourism, he signed himself up to be a licensed tourist guide and became a lifetime member of the Sabah Tourist Guide Association (STGA). In 1991, Baton was handpicked again by founder and Managing Director Albert Teo to lead Borneo Eco Tours as Manager.

When Sukau Rainforest Lodge started its operations in 1995, Baton was also appointed as the General Manager and throughout his service, he’d overseen many impactful community and environmental conservation projects not just in Sukau but all throughout communities in Sabah. He took on the role of Vice chairman for BEST Society when it was registered as a NGO in 2007 and brought on significant initiatives that motivated and improved the livelihoods of marginalised communities. He helped to lead, manage, and execute these projects and to empower them with great compassion and determination.

Throughout his time, the relationships and trust he’s built with the communities and staff were sincere beyond question. As a role model, he took the time to share his experiences and knowledge to everyone around him, especially staff under his care and guidance. Those who had the pleasure of knowing him and have worked alongside him feel great respect and admiration for just how much he’s impacted the tourism scene here in Sabah.

Baton believed that “Success is a journey, not a destination”, which is a sure testament of continuous development, both personally and for the organization. Throughout his time with Borneo Eco Tours and Sukau Rainforest Lodge, he took every success and every failure with a growth mindset as he strongly believed that there is always a lesson to be learned. With that he guided and motivated the team to always strive to deliver the best service to our guests.

In recognition of Baton’s efforts towards the staff, community, and environment in Sukau over the past 25 years and his undying commitment to many impactful ecotourism initiatives, Sukau Rainforest Lodge honours him as one of our Conservation Fellows.

This website uses cookies to improve your experience while you navigate through the website. Out of these cookies, the cookies that are categorized as necessary are stored on your browser as they are essential for the working of basic functionalities of the website. We also use third-party cookies that help us analyze and understand how you use this website. These cookies will be stored in your browser only with your consent. You also have the option to opt-out of these cookies. But opting out of some of these cookies may have an effect on your browsing experience.
Necessary Always Enabled
Necessary cookies are absolutely essential for the website to function properly. This category only includes cookies that ensures basic functionalities and security features of the website. These cookies do not store any personal information.
Non-necessary
Any cookies that may not be particularly necessary for the website to function and is used specifically to collect user personal data via analytics, ads, other embedded contents are termed as non-necessary cookies. It is mandatory to procure user consent prior to running these cookies on your website.
SAVE & ACCEPT
GET YOUR FREE E-BOOK
ASK US