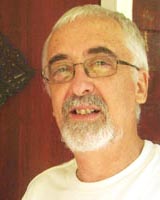 Dato' Dr. Mikaail Kavanagh or Dato' Mike has been a leader in Malaysia's nature conservation since the late 1970s when he arrived in Malaysia as a field primatologist. He is known for his grasp of technical issues matched by a rare ability to offer sound ideas and practical suggestions on conservation matters. A talent honed over many years of interacting with diverse institutions such as governmental decision-makers, business leaders, scientists and fresh graduates. Dato' Mike is an exemplary spokesperson for conservation regardless of the target audience.

Dato' Mike was born in England in 1945. He developed an interest in animal behaviour and got a degree in social psychology. After two years as an advertising executive, followed by a master's degree in the USA and fieldwork in Colombia, Mike did field work on wild monkeys in Cameroon for his doctoral degree. In 1978 he moved to Malaysia where his work on primates continued as co-coordinator of a multi-university primate research program based at University Pertanian Malaysia.

Dato' Mike's first work with WWF-Malaysia was in Lanjak-Entimau, Sarawak, in 1981. It became Malaysia's largest Wildlife Sanctuary in 1983. His book, "A Complete Guide to Monkeys, Apes and Other Primates", was published in 1983. In 1988 he married Datin Norlidah Wati Haji Rasib, who has supported him loyally ever since. He took over as WWF-Malaysia's CEO in 1991 and under his leadership; it grew from a rather small specialist organization into a widely respected national institution, significantly helping to develop Malaysian conservation advocates and professionals.

Dr. Chris Hails, Program Director of WWF International, who has known Dato' Mike since the 1970's, writes, “From a long distance, Mike's legacy for the Malaysian environment is tangible, and the country has benefited enormously from his dedication and hard work over the years. When I joined WWF in 1988 Mike had already been there for some years but we were thrown together to tackle issues surrounding sustainable forest management. We learned that having experience in both Asian and Western cultures gave us a tremendous advantage in helping to devise positive outcomes to problems in the international arena. Foreign perspectives and local realities are not always easy to meld together and Mike has been able to do this with great skill”, he added.

Even though retired he continued to work on the “Heart of Borneo”, an initiative to conserve and sustainability manage the forested border lands of Malaysia, Indonesia and Brunei in an area that is about six times the size of Switzerland. His role in this international conservation effort shows that he is an inspiring conservation leader not only in Malaysia, but in the world.

For his outstanding work, Dato' Mike was a made a Dato' of the State of Perak in 1996, and a Member of the Most Excellent Order of the British Empire (MBE) in 2002. He points out that these honors are a tribute to the work of many equally deserving people and is quick to acknowledge the contribution of everyone concerned with Malaysian conservation.