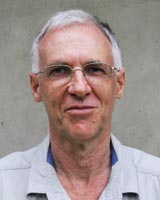 From England, Dr. Junaidi (John) Payne is the Senior Adviser to WWF Malaysia. He got a B.Sc (Zoology) from King's College, London University in 1972 and a Ph.D. (Tropical Ecology) of Cambridge University in 1979.

Dr. Junaidi Payne was employed by WWF Malaysia from 1979 to 1998, working in Sabah on a variety of conservation projects including wildlife surveys, Sabah Conservation Strategy (adopted by the Government of Sabah in 1992), and early proposals for Kinabatangan Wildlife Sanctuary (1988-94). After working in Kalimantan, Indonesia, from 1999-2002, he re-joined WWF Malaysia as an adviser on conservation of large mammals and forestry issues. He has written several books including A Field Guide to the Mammals of Borneo (co-authored with Charles M Francis, 1985, published by The Sabah Society) and This is Borneo (1994, New Holland Publishers).

Dr. Junaidi remarked, "The remaining natural forests around Sukau are examples of an extremely rare habitat type - natural vegetation of an alluvial floodplain. This is the once-widespread habitat of South-east Asia, which in early times (thousands, or at least hundreds, of years ago) was converted to rice paddies. Rice can grow only in open, exposed areas free of invading tree cover. The ability of certain varieties of rice to grow in flooded land, where few tree species can grow, was a part of the reason why rice expanded as the major food crop through South-east Asia”.

It is unclear why the lower Kinabatangan escaped human settlement and conversion to rice fields in ancient times. In the nineteenth century, the British administration thought that piracy from the southern Philippines and head-hunting raiders from Kalimantan were the main reason for the very small number of human in habitants of lower Kinabatangan. More likely, the unpredictable timing and depth of flooding compared to that generated by the more seasonal rainfall patterns on much of mainland Asia, made rice growing too risky in the high but erratic rainfall zones of Borneo.

Floodplains are not a stable ecosystem. Slow attrition and re-deposition of sediments means that the river's course changes slowly. A big flood can cause a rapid change at some localities, especially by cutting through a big bend in the river. Oxbow lakes can be created almost overnight, but they remain can dry for centuries before being filled with sediment and pioneer vegetation.

In appreciation to Dr. Junaidi's effort in conservation, Sukau Rainforest Lodge is pleased to dedicate room no. 4 to him.