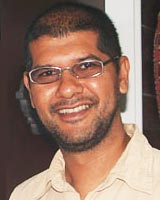 Dr Reza Azmi, was born in Kuala Lumpur but spent most of his formative years in the UK. He graduated with a degree in environmental sciences from the University of St Andrews in Scotland. Reza's connection with the Kinabatangan began early in his career as a volunteer with WWF Malaysia. The project looked at the relationship and use of forest resources by local communities living along the Kinabatangan River. This was the start of a five-year fascination with the Kinabatangan – the floodplain forests, the history of the people and also the changing economic influences on the region.

One of the publications "The Natural Vegetation of the Kinabatangan Floodplains" (1998) remains one of the key references for the region. One group of plants typical of the floodplain forests became the subject of his doctoral thesis (A Taxonomic Revision of Ceriscoides Rubiaceae in South East Asia). The other rarity unearthed in the Kinabatangan was a new species of Begonial azat. The name "lazat" (delicious or tasty in malay) was used as local people often used the lemony tasting leaves for cooking.

One of the other early projects that Reza has worked on has been the website, www.wildasia.org, a website on natural areas in Asia. Developed in 1998, the site currently draws in over 6,000 visitors per day and has been voted Best Tourism Publisher by Tourism Malaysia two years in a row (2004 & 2005). Since 2004, Reza has also been instrumental in conceptualizing Wild Asia's Responsible Tourism Initiative – an initiative to promote sustainable tourism in destinations by working with tourism operators and engaging travelers. The initiative was highlighted by APEC in 2006 as one of the "Best practices in Sustainable Tourism".

By 2003, Reza started a pioneering conservation effort, Wild Asia a significant force in promoting the conservation of natural areas. Unlike other conservation groups, Wild Asia directly engages the private sector and works to educate businesses and huge progress is achieved. It 's no surprise the two core areas of work for Wild Asia are highly relevant to the Kinabatangan - engaging responsible oil palm plantation companies and promoting responsible tourism. These are the two major economic contributors in the Kinabatangan and companies can have a positive role. Getting it wrong is what we fear the most given the richness and beauty of the Kinabatangan.

As a tribute to Dr. Reza's contribution in conservation, Sukau Rainforest Lodge dedicates room No. 8 to him.