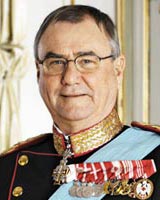 On 10 June 1967, the heir apparent to the Danish throne married Henri Marie Jean André Count de Laborde de Monpezat, who in connection with the marriage became HRH Prince Henrik of Denmark. HRH the Prince Consort spent his first five years in Vietnam, the then French Indo-China, where his father was in charge of family interests in industrial enterprises etc, founded by his grandfather at the turn of the century. In 1939, the family returned to the family residence le Cayrou in Cahors. Having received instruction at home until 1947, The Prince Consort subsequently studied at the Jesuit boarding school in Bordeaux.

In the period 1948-1950, HRH the Prince Consort attended upper secondary school in Cahors. His Royal Highness returned to Hanoi in 1950 and graduated from the French upper secondary school in Hanoi in 1952. In the period 1952-1957, The Prince Consort studied law and political science at the Sorbonne, Paris while simultaneously studying Chinese and Vietnamese at École Nationale des Langues Orientales. Having studied Oriental languages in Hong Kong in 1957, Prince Henrik subsequently studied in Saigon in 1958.

HRH The Prince Consort performed his military service with the infantry in Algeria in the period 1959-1962. His Royal Highness holds the honorary rank of General and Admiral in the Danish Defense. Prince Henrik has a background in the diplomatic service. In 1962, His Royal Highness worked within the Asia Department of the French Ministry of Foreign Affairs, and from 1963 to 1967 as a Secretary to the French Embassy in London.

In honour of His Royal Highness' contribution, we dedicated room no. 10 to HRH Prince Henrik.