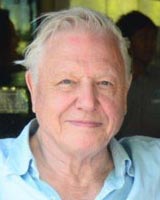 Sir David, is one of the world's most respected TV broadcasters and well known for his face and voice in natural history documentaries. He grew up in Leicester, the UK and went to Cambridge to pursue his studies in “Natural Science”. After graduation in 1947, he did national services in the Navy. Then in 1952, he joined the British Broadcasting Corporation (BBC) and that's where his career started. He has his first opportunity to undertake expeditions to remote parts of the globe to capture intimate footage of rare wildlife in their natural habitat. From 1965 to 1969, Sir David was the controller of BBC2; he initiated a wide range of programs including Live Snooker, Match of the Day, The Likely Lads and Mastermind.

Sir David is well known for his natural history series that he wrote and produced. His ease of presentation has attracted the interest of new generation viewers. Readers' Digest found that Sir David is one of the most reliable and trusted British celebrities.

His major series include:

Also narrated over 250 program of “Wildlife on One”- A BBC flagship natural history program.

Sir David is outspoken on issues such as environmental damage, global warming and extinction of particular species. In support of forest regeneration, he lent his voice to WWF in their fight to protect endangered species and campaign for wildlife protection. His statement during his first visit to Borneo in 1972:

“Life on Earth is not evenly spread around our planet. Borneo- the world third largest island is one of its richest treasure –houses, full of immense variety of wild animals and plants. All loving in magnificent tropical forest; like almost all such forests, it is under the threat of degradation due to economic and social pressure. The forests are not just the home of wildlife; they protect the land and give birth to the island's rivers. They maintain the ecosystem of Mother Nature both the habitat of animal and humanity and their countries' economies. Please join me to help save the heart Of Borneo- A global Heritage.”

Sir David and BBC crew were in Sukau for their documentary filming from 11th-19th October 2011. It was a memorable experience for Sukau Rainforest Lodge (SRL) to host and to be the ground handler during their stay here.

What really makes Sir David Attenborough a champion of conservation in Sukau, Kinabatangan and a true Conservation Fellow was his recent action that put a stop to the building of a bridge over Kinabatangan River. His private letter to the state's Chief Minister was a real eye-opener that halted a huge project that could have negatively impacted the wildlife and their natural habitat in the area.

Read more about the project and how Sir David was able shine a light on the issue here.

We are truly proud to honor Sir David by naming Villa no. 9 after him.