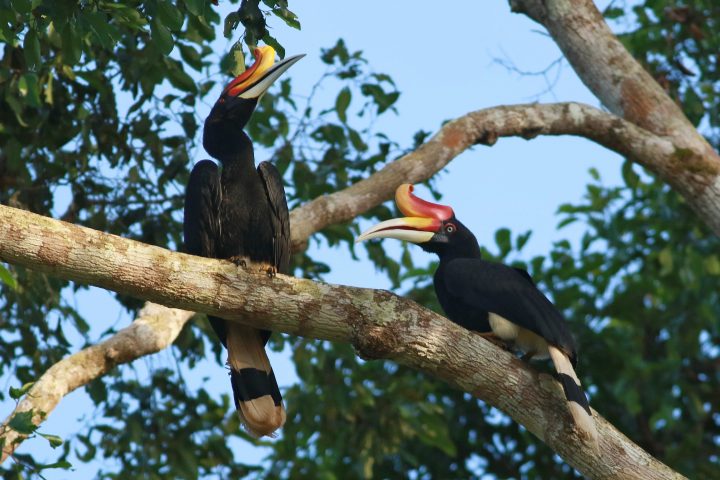 Up close and personal with the Majestic Avian.

One of Asia’s most attractive species of birds. Majestic in nature and an absolute head-turner for its flamboyant casque adorned with striking coloration. Hornbills are truly one of the most iconic creatures that represent the pristine tropical rainforest of Asia.

Often time whenever people see this bird, it always keeps them feel amazed and mesmerized by the bird’s conspicuous description. Sadly not all realize the importance of this bird’s presence in the tropical forest that they inhabit, what role they play, and how to happen it vanish.

Fondly referred to as ‘farmers of the forest”, hornbills play an important role in dispersing seeds in the tropical forest and ensuring the survival and regeneration of the ecosystem of the forest. Without a doubt, hornbills are important seed dispersal agent with crucial ability to commute over long distances, effectively disperse and ensuring the seeds reproduction.

This is not possible by the other seed dispersal agents especially terrestrial animal, due to the landscape restrictions or man-made barrier that had been and keep impeding these animal movement.

Today, with current issues of deforestation that are still ongoing, hornbill’s survival is in peril. As a consequence of many forests vanishing due to intense human activities, the hornbill population has been dramatically declining as these species are extremely dependent on these large forested areas. Besides deforestation, hunting pressure is also one of the reasons for this species’ rapid decline over the years.

Of the 62 extant species of hornbills in the world, 30 species are found in Asia and Borneo. This island itself is home to 8 species of this large avian and remarkably all recorded in the Kinabatangan region, particularly in Sukau.

All eight species of hornbill that occur in Kinabatangan are listed in the IUCN Red List, from Critically Endangered Helmeted Hornbill to the Least Concern Oriental Hornbill. All species showcase distinctive features with their own unique natural history.

Check out below for more of these majestic flying creatures and learn more about one of the wonders of the rainforest.

Arguably the most common species of the hornbill, this white and black colored hornbill is known to be greatly adaptable to any habitat changes compared with other hornbills.

A species that inhabit diverse types of habitats, from lowland tropical forests to mangroves and even farmland and urban habitation. Medium black-and-white colored bird with pale yellow bill and black-tipped casque.

Oriental Pied Hornbill shows the similarity between sexes in coloration. However, the male casque is larger and more projecting than the more blunt-look casque of the females.

Typically seen in a pair, like most of the monogamous species. This species is usually seen in large flocks which only occur during the courtship period when the juveniles are in search or competing for their potential lifetime candidate.

Appear to be a loud bird, this species carries a harsh ear-piercing incessant cackling and screeches, described more like a maniacal-like call.

Occur in primary lowland forests, usually below 200m elevations. This species is most of the time seen in pairs and rarely in flocks. Unlike the Oriental Pied Hornbill, Asian Black Hornbill usually dwells in the upper and middle forest canopy and it’s a species with a high preference for more deeper and dense forests.

Almost entirely black-covered plumage except for white at the outer tail feathers, males of Asian Black Hornbill have a large bone-white color bill and casque.

The females have the opposite color, which is a distinctive blackish. Some individual males of this species have distinctive prominent white or pale grey superciliary or eyebrow stripes, which are absent for some males.

Like the Oriental Pied Hornbill, these species are extremely vocal. The call describes a crow-like with more raspy growls. Some even describe the call sound like regurgitating!

A social bird, living in noisy flocks of 8 to 12 individuals. These species are known as communal or cooperative breeders where during the nesting period, each individual will divide the tasks of protecting and feeding both female and chick.

Like all Bornean hornbills, Bushy-Crested Hornbills are secondary cavity-nesting. The nest is typically built on the natural cavity of a tree and the female is usually sealed inside the chamber for several months before breaking out, once the chick reaches adolescence.

The male has a black bill and a smaller casque, the female’s bill is yellowish at the tip and darker at the base with a black casque.

Calls are high-pitched, gull-like squawking and chattering yelps that can be heard over a mile away.

Named after their yellow and red “wrinkled” casques and the ridges on top of their bills. This brightly colored bird, male and female can be distinguished by the color of their casque.

The males have red colored casque and female is yellow and smaller in size. Throat coloration is also prominent, pale yellowish for males and whitish-blue for females.

Semi-nomadic birds, moving from one area to the other dependent on local fruiting, feed mostly on fruits like figs and also occasionally small animals such as lizards, frogs, and even young birds.

Like other large hornbills, their presence nearby typically can be noticed with the loud sound of the bird flapping wings. Wrinkled Hornbill wings have ten rounded primaries that allow air to go through and create a loud whooshing sound.

The most carnivorous and the eccentric-looking of all hornbills. The only species with a tufted crown and noticeable white crown of feathers which erected in a spiky crest at the top of the head.

Just like other hornbills, this White-crowned Hornbill also possesses an ornamental casque, but it is less prominent like other species as the size is smaller and it is well covered with bushy-upright white feathers.

Also known as the quietest among the other hornbills. The call can be described more as a pigeon-like, lively hollow call and characterized as a series of a mellow double with a triple of owl-like hooting coos.

Males and female of this species can easily be distinguished based on the color from the throat all the way to the underparts, males have cotton-white colored while females are entirely black.

The only species found on higher elevations up to 3,300 m above sea level. Occurs in the primary rainforest, mainly in the foothills.

Named after the distinctive knobs called casque that resembles ridges or wreaths, that sit on top of the base of their bill that looks like a carved piece of wood with neat wreaths.

You can see the male of this species has a brick red crown and nape with a white cream-colored face and neck. Underneath the bill of the male is a yellow gular pouch with blue-black lines in the middle.

The females, on the other hand, are much smaller in size and have a black-colored head and neck with a blue gular pouch, with a black line in the middle. The species also appear to have eyelashes, which are actually feathers that grow above this bird’s eyes.

This large bird has long and broad wings, and the beating of the wings as they fly above the canopy, produces a loud “whooshing” sound, resembling the noise small aircraft fly through the forest.

The most recognizable and consider one of the most iconic animals in the tropical rainforest of this island. There are 3 subspecies has been recognized, inhabit numerous localities, and have distinctive and prominent features.

At first glance, both males and females are almost identical. However, both do have a few different characteristics. First, both sexes have similar coloration and possess a casque that is shaped like an upturned cylinder or rhinoceros horn.

The second largest species in the family, Rhinoceros Hornbill is regarded as a bird of significant importance in this island’s indigenous community.

The Iban, Sarawak’s largest Dayak of Borneo refer to this bird as Kenyalang, which has significant meaning in one of the tribe’s major rites called Gawai Kenyalang, a celebration where this bird became an essential part of the ceremony.

It’s a major celebration where a culmination of a large and painted figure of this bird, erected on top of the poles high into the air. It symbolized the spirit of the hornbill is ready to carry the messages from the human world to the upper-spirit realm.

Characterized by large size, these species have a relatively short bill but remarkably lengthy elongated tail feathers that can reach 30-45cm. Both male and female showcased their differentiation.

The difference is shown particularly on the coloration of the neck, where the male has a bare red colored neck and the female has a pale bluish-turquoise colored.

The heavyweight in the hornbill family, Helmeted Hornbill is the only species with a solid ivory-like casque. Pure and hard keratin that remarkably comprised over 10% of the bird’s body weight.

The call is one of the distinguishing sounds of the rainforest. The haunting calls its a series of slow and deep far hooting notes that build up gradually in speed before peaking in with a loud maniacal cackling call.

Amazingly this daunting song astoundingly can be heard from 2km away.

The most threatened species is due to hunting pressure for the bird’s valuable body parts, which is the casque. In late 2015, IUCN downgraded this bird’s status from Near Threatened to Critically Endangered which is closer to Extinction.

In January 2015, the Environmental Investigation Agency highlighted the threat, indicating that black market prices for this casque are up to 5 times higher than for elephant ivory.

There’s a shocking record in 2013, stating that an estimated at least 500 adults were killed each month in West Kalimantan province alone, making up 6,000 killed in a year!

On top of this hunting-for-trade demand, habitat loss also heavily affects this species for ages. It resulted in a lack of food sources and nesting sites became extremely scarce. It’s an unsettling fact that the future of this majestic bird became uncertain and action are need to be taken to ensure this species’ survival.

Without a doubt, hornbills indeed are exceptional creatures. One will always feel astonished whenever setting eyes on this majestic bird. The more you learn about them, the more you feel appreciated for this bird and other wildlife’s existence.

Sukau of Lower Kinabatangan is one of the few remaining places on this island that hosted all of the Bornean hornbills. All eight species inhabit this area and the chances to spot them are higher here than in other places. If these birds are on your checklist, do check out our birding packages or reach out to us for a personalized itinerary tailored just for you!

This website uses cookies to improve your experience while you navigate through the website. Out of these cookies, the cookies that are categorized as necessary are stored on your browser as they are essential for the working of basic functionalities of the website. We also use third-party cookies that help us analyze and understand how you use this website. These cookies will be stored in your browser only with your consent. You also have the option to opt-out of these cookies. But opting out of some of these cookies may have an effect on your browsing experience.
Necessary Always Enabled
Necessary cookies are absolutely essential for the website to function properly. This category only includes cookies that ensures basic functionalities and security features of the website. These cookies do not store any personal information.
Non-necessary
Any cookies that may not be particularly necessary for the website to function and is used specifically to collect user personal data via analytics, ads, other embedded contents are termed as non-necessary cookies. It is mandatory to procure user consent prior to running these cookies on your website.
SAVE & ACCEPT
GET YOUR FREE E-BOOK
ASK US