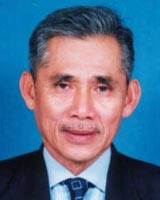 Tengku Adlin, is the Chairman of the Sabah Tourism Board for the past ten years. He was appointed Chairman of the Sabah Tourism Board (Sabah Tourism) in 2000. He was able to chart a clear way forward, strategic networking, hand in hand, with key players in the tourism industry. Promoting and marketing Sabah Nature'ally the Best of Borneo as 'A Premier Nature Adventure Ecotourism Destination’ that has resulted in significant double digit growth per year in tourist arrivals over the past 10 years. Tourism contributed 15% of Sabah GDP in 2007. With 40% repeat visitors, focusing on the principle 'Less is More' high-yield, longer-stay, domestic and regional tourists. He won the highest Tourism Malaysia Award in 2005 - the Minister Special Award for an Individual. He is a regular guest speaker at international and national conferences, seminars and forums on ecotourism, conservation, nature and adventure.

He was a pilot with a short flying stint in the late 50's and early 60's. He held senior posts at district and State levels in the Kelantan Civil Service and the Malaysian Home and Diplomatic Service (1962-1967). He studied public administration at Birmingham University, England and at the School of Local Government Studies, Sigtuna University, Sweden, and at the Asian Institute of Management (AIM) Top Management Program.
He was the first CEO of the Sabah State Housing Commission (1968-1973) and introduced public low- cost housing with land banks in major districts throughout Sabah. He was also the first Deputy Director of the Sabah Foundation (1974-1996) and Corporate Adviser (1997), responsible for institutional and capacity building besides contribution in formulating the philosophy, vision, mission, corporate plan, development programs. Projects include the Sabah Foundation Tower (Menara Tun Mustapha), Sports Complex Likas, Coastal Road Likas Bay Recreational Leisure Belt (1975), the Flying Doctor Service, Hostels for Rural Students, ITM and UKM Branch Campuses (1974), Temporary Campus UMS /YSCC (1995) and Sabah Nature Clubs.

He is the author of numerous books and publications on conservation, nature and adventure. He has led, pioneered or participated in many expeditions to unexplored natural history sites in remote interiors of Sabah since 1968. A species of Rafflesia discovered on Mount Trusmadi is named after him Rafflesia tengku-adlinii (1988). As a trustee of Sabah Parks he was actively involved in exploring and creating new trails on Mount Kinabalu, diving surveys and marine conservation initiatives in Sipadan, Tun Sakaran Marine Park Semporna and the proposed Tun Mustapha Marine Park Kudat. Mountain climbing, badminton, jungle trekking, scuba diving, skydiving, paragliding and aerobatics are his passion.

He initiated the conservation of Danum Valley and Maliau Basin 'Sabah's Lost World by the Sabah Foundation. Tengku Adlin established the Danum Valley Field Research Centre in 1984 and the Borneo Rain Forest Lodge in 1994. He played a leading role as Chairman of WWF Malaysia in the establishment of the Kota Kinabalu City Bird Sanctuary in 2000 and the formation of the Sabah Wetlands Conservation Society in 2007, Malaysia's first Gift to the Earth Kinabatangan floodplain in 1999 and the Corridor of Life of the Lower Kinabatangan Wildlife Sanctuary in 2006 by the Sabah Government. The Heart of Borneo Three Countries One Conservation Vision initiative that was mooted in 2001 of, which he was involved right from conceptual stage, and realised in 2007 by the Declaration of The Heart of Borneo by Brunei, Indonesia and Malaysia in Bali under the auspices of ASEAN and the Conference of Parties Convention of Bio-diversity of the United Nations .

He was given an Honorary Doctorate of Philosophy by the University Kebangsaan Malaysia (1995), the Langkawi Award, and Malaysia’s highest recognition for conservation (1999) by the King of Malaysia and the World Wide Fund for Nature (WWF) Duke of Edinburgh Conservation Gold Medal (1999) at Buckingham Palace. He was conferred Datukships by the Sabah Head of State in 1975 and in 1985 by the Sultan of Kelantan followed by Seri Paduka Mahkota Perak by the Sultan of Perak in 2006.

Tengku Adlin was born in Kota Bharu Kelantan in 1940, is married, has three daughters and a son, and has lived in Sabah for the past 40 years.

Sukau Rainforest Lodge is proud to dedicate room no. 5 as our highest recognition for his remarkable contribution in conservation.